In the early 1980’s we used to water-ski in the Conway estuary. Surprisingly, we could ski at all stages of tide, although how we managed at low tide I can’t think. John Mayor suggested that I was a qualified water-ski instructor, which of course wasn’t quite true.

The reason that we stopped was due to the popularity of jet skis, which were horribly noisy and therefore ‘speeding’ in the estuary was banned. We continued for a while upstream of Conway Bridge, but it became impractical except when the tide was high.

When my speedboat gave up the ghost, Bob Phoenix took over for a couple of seasons, but then Bob moved away and water skiing sort of died out. However, there was one final fling - in 1991 turned out that one member of my Business Studies 6th Form Nick Williams, was an expert who could actually ski barefoot; another, Jamie Pierce, had a ski boat, and yet another, Robert Jones, had a Land Rover, so we persuaded those in power that it would be okay to ski on Lake Geirionydd on Wednesday afternoons. Jamie and Rob would take the boat up and I would follow with a minibus full of skiers. It was great, particularly as the water in Lake Geirionydd is clear and weed free. However, the lake is rather narrow, and I remember one particularly hairy moment when Richard Phipers was skiing flat out, far out on the right hand side of the boat, and a skiff with a couple of fisherman in it suddenly turned into Richard’s path and I shut my eyes fearing there was going to be an almighty coming together, but somehow they managed to miss each other.

Another time, years earlier, in the Conwy estuary, the skier, Peter Guthrie, was flat out on the left hand side of the boat much too close to the stony beach. I watched in horror as he hit the beach and turn at least one somersault. I thought that it would be the end of him, but he got up and just said, “Sorry Sir.” So that incident ended happily too.

My final anecdote concerns a ski. In those days, when mono skiing, we would go up on two skis and then cast one off; because of this I had all skis labelled with my name, address and phone number in case of loss. One afternoon we lost a ski and assumed that it had disappeared forever, but that summer, during the holidays, Ron Crane, the school’s maintenance manager, was visiting a friend near Preston, and lo and behold the friend had found my ski when walking his dog his dog on the beach in the Ribble estuary. What are the odds of that happening?

Here is a photograph taken in the early 80’s in the Conway Estuary. 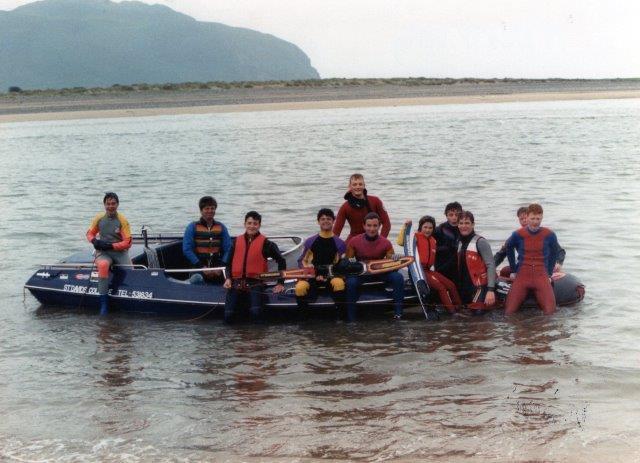