This coming weekend, Old Davidean Sophie Hendy is on her way to the Hairdressing Student of the Year 2017 Finals being held at L'Oreal Studios in London.

Sophie has won several accolades in the past 18 months including the new Sue Bleasdale award at the World Skills Show UK 2016 at the NEC in Birmingham. Read the press release below:

"A hairdressing apprentice has scooped a new award at a national skills competition.
20 year old Sophie Hendy returned from the World Skills UK finals in Birmingham as the first recipient of a special award presented in memory of Sue Bleasdale, a prominent World Skills UK judge who passed away in the October prior to the competition in the November.
The award is presented to the competitor who presents the following qualities that Sue was passionate about: being part of a team, displaying empathy and kindness.
Ms Hendy, who lives in West Shore and works for Tommy's Hair Company in Llandudno, was one of the top eight finalists in the hairdressing final, which comprised five different tests over three days at the Skills Show at the NEC.
She said: "Whilst winning the competition would have been great, I was honoured to receive this special award which reflects on how I am as a person. It was a good experience to push myself and be part of a team. It was also nice to have the support of each other because all the finalists got on really well. I'm going to enter as many competitions as I can because I love being creative. I would love to get to the final again next year."

Since winning the award at the Skills Show UK she went on to win at the World Skills Wales competition being ranked number 1 and becoming the Welsh Champion in Advanced Hairdressing.

On Monday 15th May at the awards ceremony in City Hall, Cardiff, Sophie was presented with a medal from the Minister of Lifelong Learning and Team Wales in recognition of her achievement at the World Skills Show UK and representing Wales as part of the Welsh Squad at this event.

We wish Sophie all the best for the National Finals this Saturday. 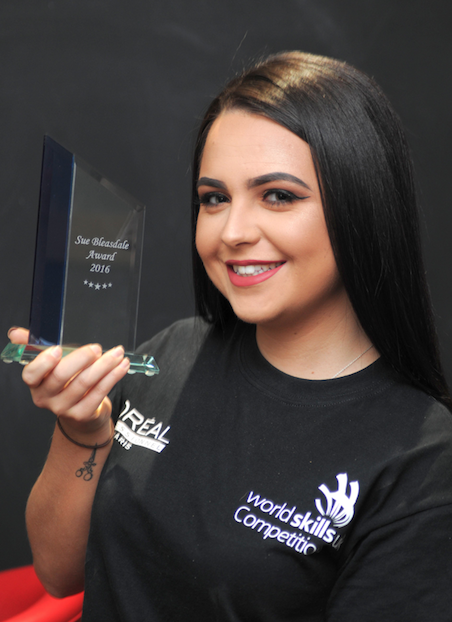